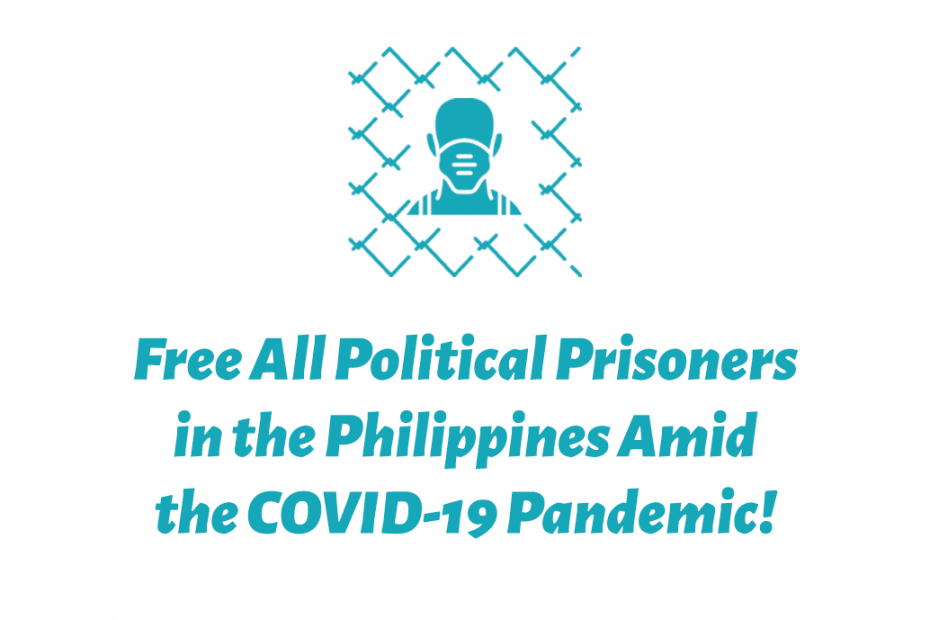 Update (May 6, 2020): Adelaida “Nanay Ede” Macusang, political prisoner and peasant leader of the Montevista Farmers Association (MonteFarMa) in Davao de Oro, passed away on May 4th, just 24 days shy of her 62nd birthday. She is the first political prisoner to die during the COVID-19 pandemic and the fifth one to die under the Duterte administration. In a Facebook statement Kapatid explained how Nanay Ede’s “untimely death underscores the failure of the prison system to provide even the most basic health care for treatable illnesses that justifies the petition we filed at the Supreme Court seeking the humanitarian release of the elderly and the sick who are most vulnerable to succumbing to the pandemic.” Now, more than ever, we reiterate the call to free all political prisoners in the Philippines! Set them free, and send them home! Rest in power Nanay Ede!—

Their consistent demand takes on heightened importance at this time, with the March 25th declaration of the UN High Commissioner for Human Rights, Michele Bachelet, for governments to take action to protect the health and safety of people in detention in the midst of the COVID-19 crisis.

We call for the release of all political prisoners detained in the national penitentiary, military camps, jails, and detention centres all over the Philippines. In particular, we demand immediate attention and priority for the elderly and the sick, pregnant and nursing mothers, those due for parole or pardon, accidental victims of political detention, and, in the case of the 11 political prisoner couples, the release of one spouse per couple.

For as long as there has been resistance and dissent in the Philippines, there have always been political prisoners, the living witnesses to state repression. There are currently 609 political prisoners in the Philippines, of which 100 are women, 47 are elderly, and 63 are suffering from serious ailments and in need of medical attention. These men and women represent the decades-long people’s movement fighting for a truly sovereign, just and democratic Philippines.

Among the political prisoners are National Democratic Front of the Philippines (NDFP) Peace Consultant Rey Casambre, battling hypertension and Type-2 diabetes; Dionisio Almonte, 62-year-old who suffers from diabetes, blurred vision and a slipped disc; urban poor organizer Reina Mae Nacino who is five-months pregnant; Ferdinand Castillo, peace consultant of the NDFP who was arrested in 2017 over various trumped-up charges; Marklen Maogo Maga, staff at the national labour centre Kilusang Mayo Uno arrested on trumped-up charges for his labour organizing; Frenchie May Cumpio, journalist and Marissa Cabaljao, spokesperson of People Surge, the community organization of those affected by Typhoon Haiyan, both detained in Leyte; and Vicente Ladlad, NDFP Peace Consultant who is dire need of medical treatment for his chronic pulmonary disease.

In Negros Island alone, there are 99 political detainees. Almost all of them were arrested under Duterte’s government.

The Philippines is notorious for having the most congested correctional system in the world. With a 605% congestion rate, meaning six people in a space meant for one, it is the perfect incubator for the rapid spread of the infectious COVID-19.

On top of congested prison spaces, there is lack of clean water and little to no medical attention and supplies, and inferior food. The precautions during the COVID-19 pandemic that require physical or social distancing and cleanliness to slow the spread are impossible to achieve inside these deplorable conditions. It is not only the health and safety of the prisoners that are harmed, but also that of the guards, the visitors, and other workers in the prison system.

UN High Commissioner Bachelet, herself a trained medical doctor and former political prisoner in Chile under Pinochet, knows first-hand of these conditions. She warned of the “potentially catastrophic” consequences where “physical distancing and self-isolation in such conditions are practically impossible.”

The scenario of a prison overrun with cases of the virus is an unimaginable challenge to a health care system already overburdened by COVID-19 cases and deaths. To keep the prisoners in jail goes beyond neglect. It is tantamount to death sentences for these prisoners.

Countries around the world are already opening their prisons and releasing prisoners, low-risk offenders and those in medium security prisons. Iran, Poland, Ethiopia, Libya, Afghanistan, Germany and New York CIty, New Jersey and Chicago in the United States have started to release its prisoners to stem the outbreak of the COVID-19 virus. In Canada, some 1000 inmates in Ontario were released and many more to follow. Already, detainees in a couple of immigration detention centres in the United States have started hunger strikes to demand their release. In Colombia, the protests of the prisoners against overcrowding and poor health services have left at least 23 prisoners killed, a situation that is likely to happen if governments do not act fast enough and release their prisoners.

In the meantime, ICHRP-Canada calls on the Philippine Bureau of Corrections and the BJMP to allow for the immediate and continued supply of soap, clean water, medical and sanitary facilities, medical staff and the provision of medicines, to adopt procedures to allow families of political prisoners to pass on supplies, and to communicate regular updates regarding the status of political prisoners who are amongst the vulnerable populations to COVID-19.

ICHRP-Canada stands in solidarity with KARAPATAN, KAPATID and other human rights and justice groups in the Philippines in calling that all political prisoners be released immediately to their families and communities and that a general amnesty be issued.

Freedom for political prisoners is not just a public health and safety issue. It is a justice and humanitarian issue as well.

Amnesty for all political prisoners!