Bloody Sunday in the Philippines 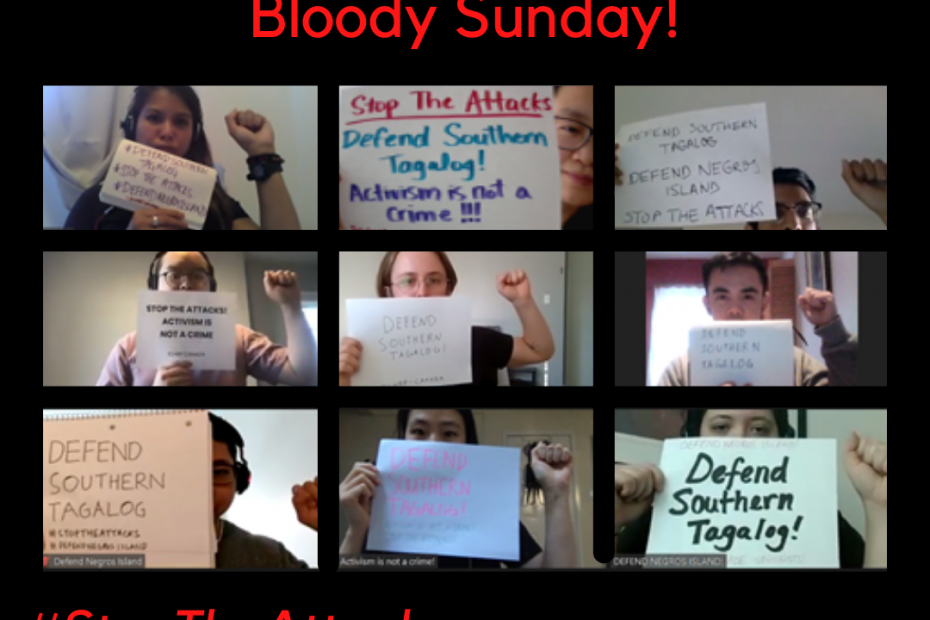 UPDATE: Sign onto the open letter to the Prime Minister’s office regarding Bloody Sunday.

On Sunday March 7, 2021, acting on manufactured search warrants, the Philippine National Police (PNP) and Armed Forces of the Philippines (AFP) conducted joint raids on the offices of activist and labour organizations in the provinces of Batangas, Cavite, Laguna, and Rizal in Southern Tagalog region, killing nine and arresting six others. The massacre occurred two days after Duterte ordered the military and police to “kill them right away, ignore human rights”.

Among those murdered were Manny Asuncion, the coordinator of BAYAN Cavite; Chai-Lemita Evangelista and Ariel Evangelista, fisherfolk community leaders in Batangas; and Melvin Dasigao and Mark Lee Coros Bacasno of an urban poor group in Rizal. The Evangelistas left behind a 10-year son, who was able to escape the raid.

ICHRP Canada strongly condemns these unjust arrests and state-sponsored murders, and the Duterte regime’s continuing persecution of human rights defenders and mass organizers in the Philippines. We insist on the rights of Filipino people to organize and defend themselves as workers, peasants, and fisherfolk against the violent tactics of the Duterte regime. We stand in solidarity with KMU, BAYAN, and other communities in Southern Tagalog. We share in your mourning and rage. We are with you, hanggang sa tagumpay.

The people of the Philippines are under relentless assault by the state. The SEMPO, originally implemented in the Panay islands and the highly militarized region of Negros, have consistently led to massacres and mass arrests of legal activists. The international community cannot ignore such violent repressions of human rights. Our unity and support overseas can contribute to the success of their movement for national liberation and genuine democracy.

1 thought on “Bloody Sunday in the Philippines”